Known as a gateway town to Grand Teton National Park, Jackson, Wyoming maintains its sense of cowboy cool with touches of the West at every corner. What might not be so apparent is the thriving art scene that defines the Jackson Hole Fall Arts Festival, and the unique events that continue to make it grow. This is a yearly happening that calls art lovers into high altitude, in a space that beckons with nature’s stunning beauty.

Director of Events for the Jackson Hole Chamber of Commerce Britney Magleby explains it best. “The reason we continue to promote Jackson as a world class art destination is because that’s what it is.” The chamber operates as a non-profit organization, and the revenue earned in September through the festival helps to fuel a year of events. At the core of this fundraising is the QuickDraw competition that takes place on Jackson’s famous Town Square. 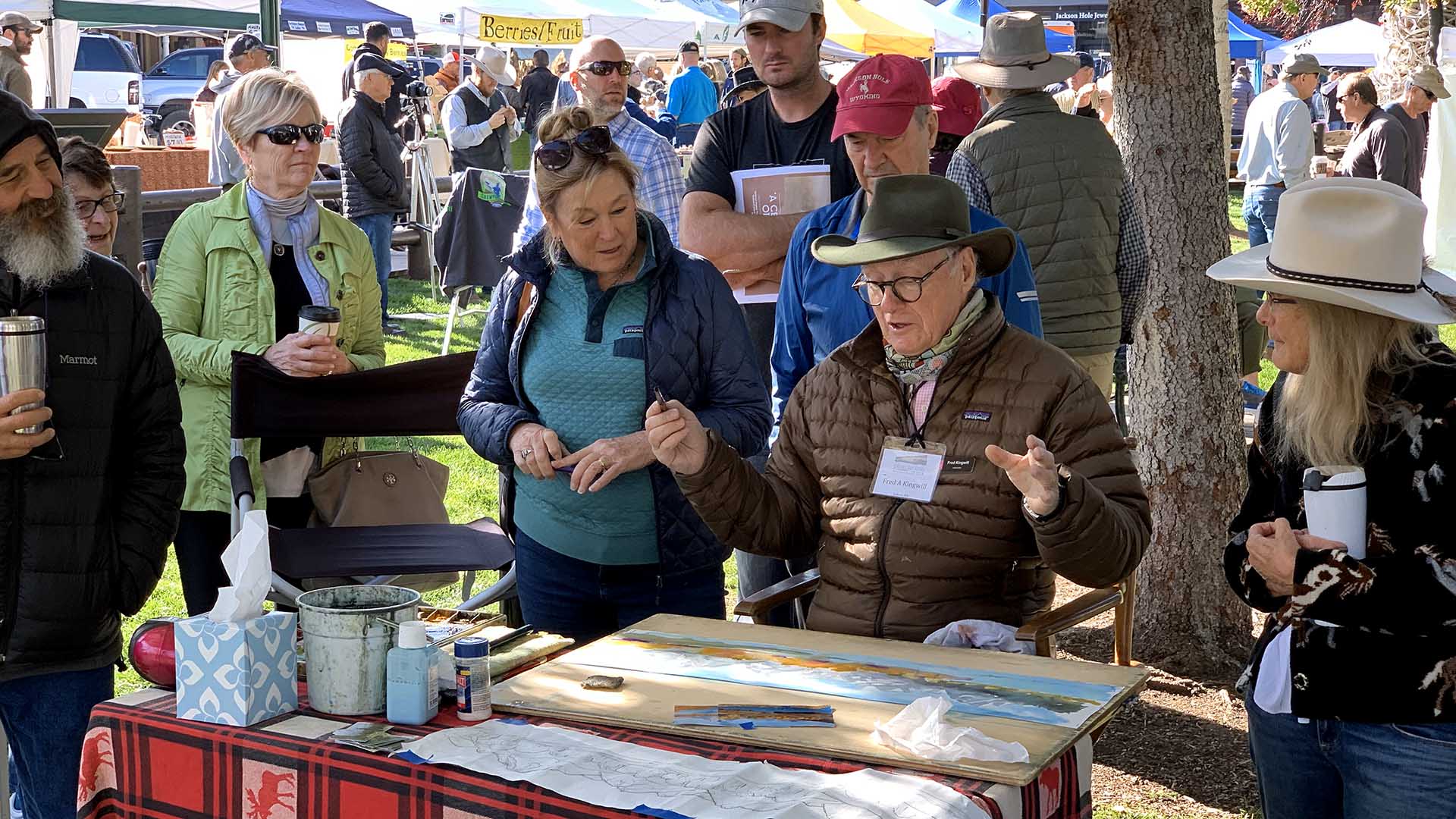 Renowned artists gather to create work in a fast-paced environment, a 90 minute race to the finish that allows the public to not only look on as the work takes shape, but to interact with the artists as well. Once completed, the art is sold at auction with 50 percent going to the mission of the chamber, and 50 percent to the artists.

The Art of Community Support

Almost 30 years ago, the QuickDraw competition was set apart from the core of downtown, and was held in the surrounding bluffs, at Spring Creek Ranch. Bringing it into the square was accomplished with the help of Terry Ray, owner of West Lives On. “We brought all of it into town so the businesses could benefit. The chamber works in support of those businesses, and it’s not just about galleries. The shops, the restaurants, they all needed foot traffic in September. Bringing QuickDraw to the square brought business into Jackson.”

“The Jackson Hole Fall Arts Festival has evolved into a lot of different things, which is wonderful. It’s big now. With the help of the chamber of commerce, it was created by business, for business.” Terry Ray, Owner, West Lives On Gallery

Seeking to highlight the wonder of Jackson’s autumn through the arts was no small task. Tourist footfalls along Jackson’s boardwalk would dwindle after Labor Day, the fresh powder that marks the start of ski season still yet to fall. Ray lays bare the intent of the Jackson Hole Fall Arts Festival, “We wanted folks to come during September for a reason, and we put art in front of them to get them here. Now September is a busy time. All of the hotels are full.” The original mission remains, and the allure of Jackson Hole’s art scene continues to lift the month of September in the eyes of an art loving public, many of whom now travel specifically to enjoy this annual coming together of artists.

The evolution of QuickDraw best reflects this ever-growing interest in the thriving Jackson art scene. Auctioning off the work is done with buyers present, but starting in 2020, the chamber of commerce enlisted the help of BidSquare, a virtual auction platform. “For that first year, we had 240 bidders online from 36 different states and 4 different countries,” says Magleby. “We now offer a live stream of QuickDraw. Like a sporting event.” 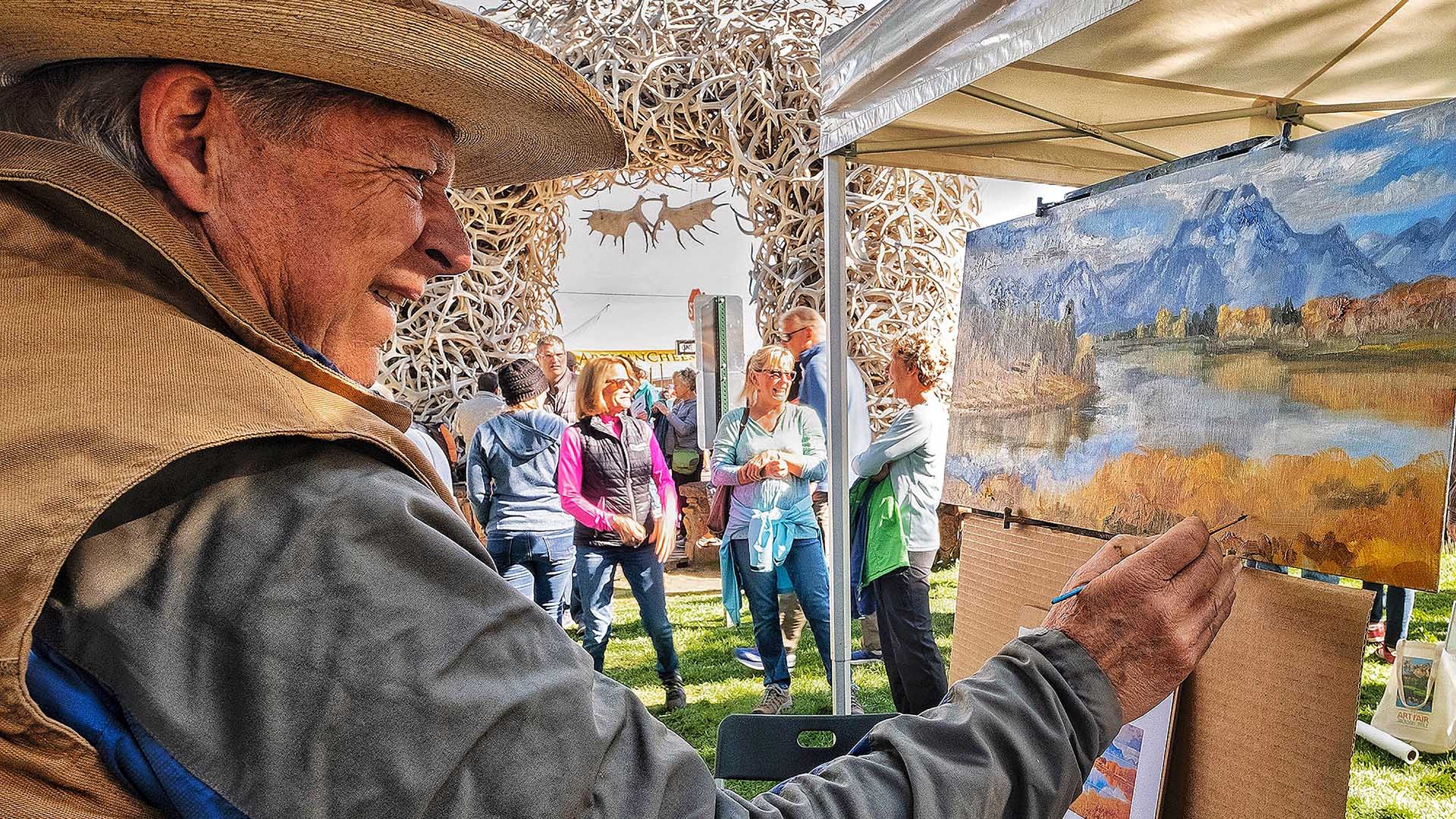 The Sport of the Draw

On the final Saturday of the week-long Jackson Hole Fall Arts Festival, artists arrive early in the morning to Town Square. The majority of the work that is created is laid down on canvas, but a handful of sculptors are known to jump into the fray. Each artist has preselected a theme, and are permitted to arrive with a margin of the work already accomplished–as long as it is less than a quarter of the effort. “This usually comes down to a portion of an underpainting,” says Magleby.

Art fans wander about, ready to take in the action. They are also able to interface with the artists, many of whom hold a certain amount of celebrity. Being able to speak directly to the creatives is a treat to be had. As anticipation builds for an 8am start, Town Square feels like the center of an art universe, designed to bring our attention to the beauty that can spring from the hearts and minds of so many creative souls.

Artist Borbay, putting the finishing touches on his work

When asked about the palpable energy of the exercise, artist Borbay responded, “My first experience in 2018 with the Jackson Hole Fall Arts Festival was thrilling. Creating on a tight timeline, in front of a crowd, harkened to my days as an enthusiastic but failed stand-up comedian in New York City.” In other words, all eyes are on the artists as they throw themselves into an intense 90 minutes of work.

Not only that, but onlookers are permitted to chat with the artists while they work. A test of creative endurance becomes a bit more complicated in this setting, with questions about process being lobbed regularly during competition. It seems the difficulty of maintaining focus would thwart the intent, but the art does see completion. 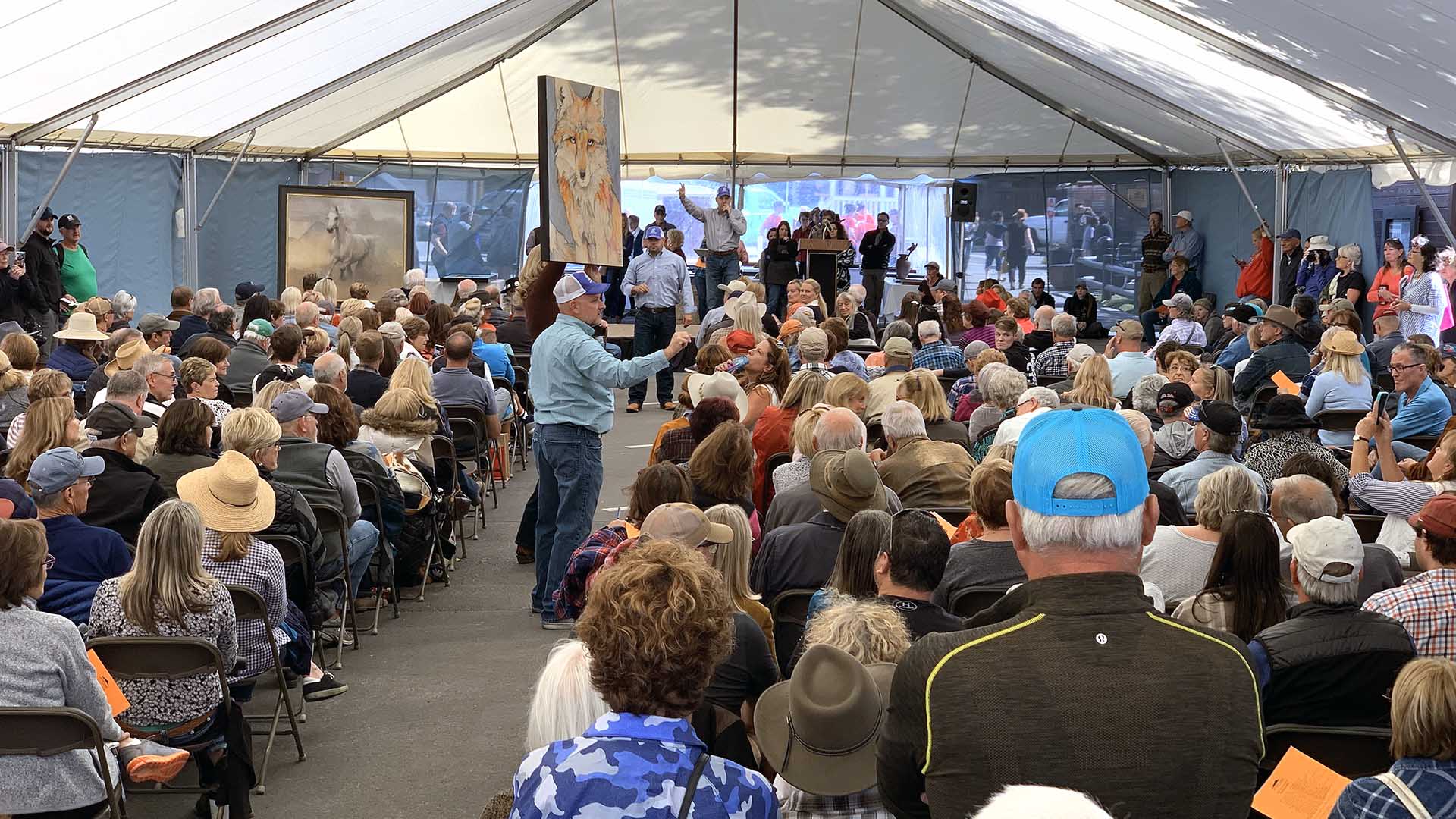 Once the work is done, the exercise is far from over. The majority of the artists involved have gallery representation, but instead of depending on a staff of curators, each has to speak about the work they have just accomplished during the live auction. After a hot sprint with brush in hand, these creatives have little time to catch their collective breath. With bidding flying in through a virtual platform, and a crowd of art lovers present to raise a paddle, this is hardly the time to relax.

Once the dust settles, the Jackson Hole Chamber of Commerce is able to celebrate a victory in community and creativity. Award winning artist Kathryn Mapes Turner–also a Jackson Hole native–boils it all down to simple terms, “Art brings people together. The world needs art, and what happens here matters. I’ve always believed that art heals and has the potential to save us all. That is what keeps so many of us going. Putting beauty into the world is important.”

Next ArticleWhere to Live in Jackson Hole