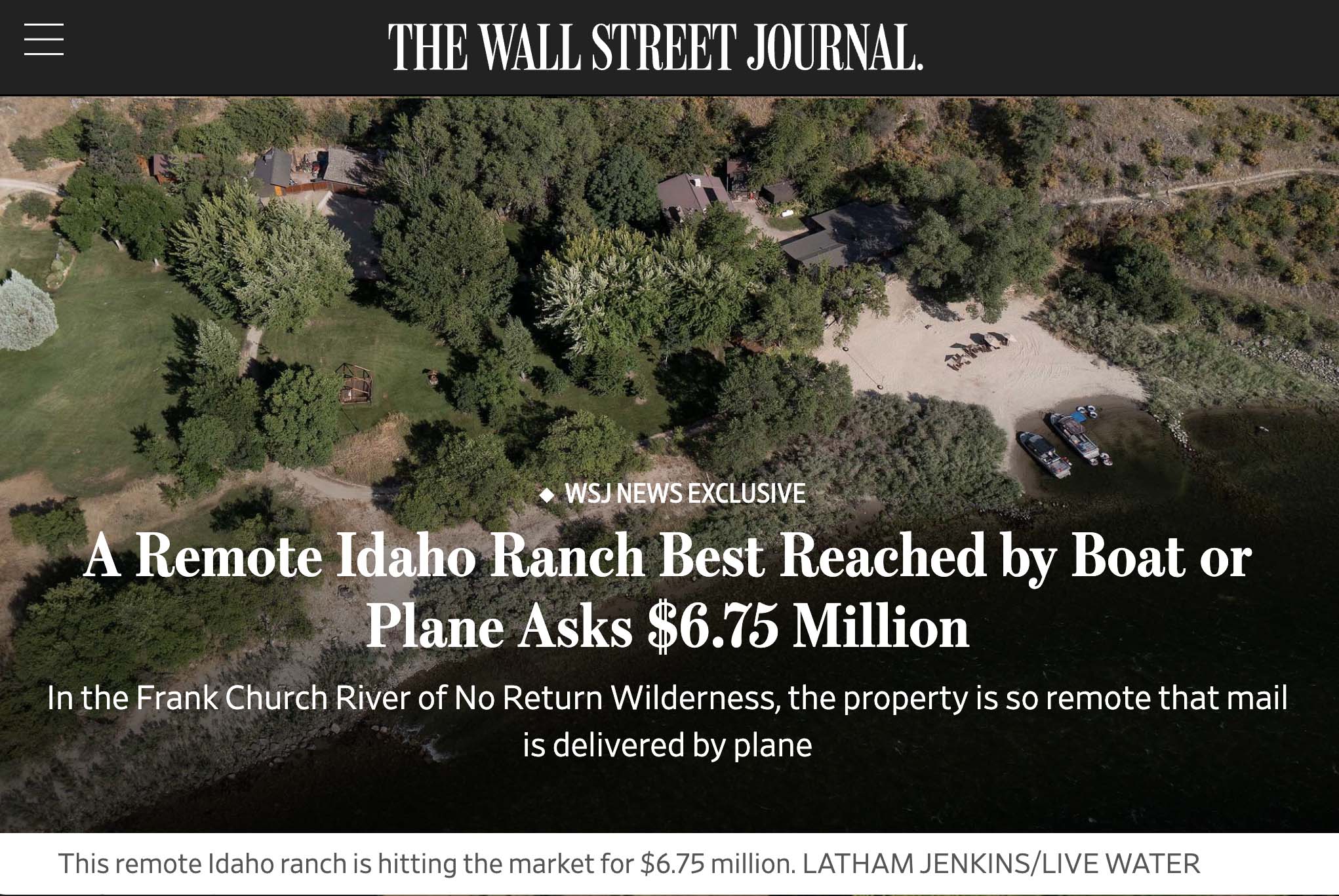 In the Salmon River Mountains, on the Salmon River, and best reached by jet boat or plane, Idaho’s Mackay Bar Ranch, listed with Live Water Properties Realtor Latham Jenkins, was included in the print edition of the Wall Street Journal on August 26. (It was featured on wallstreetjournal.com on August 24.) The Pulitzer-prize winning newspaper highlighted the 21-acre property in its Real Estate section, noting, “the Idaho ranch is so remote that mail is delivered by plane and going to the store requires two modes of transport.”

Mackay Bar Ranch has an unparalleled wilderness location. It is within the 2.36 million acre Frank Church-River of No Return Wilderness, the largest contiguous wilderness in the Lower 48 states and it is on the Salmon River, the longest undammed river in the Lower 48 States. The WSJ reported “Mackay Bar will be the most expensive property for sale along the Salmon River in the Frank Church-River of No Return Wilderness.” It is listed for $6.75 million. 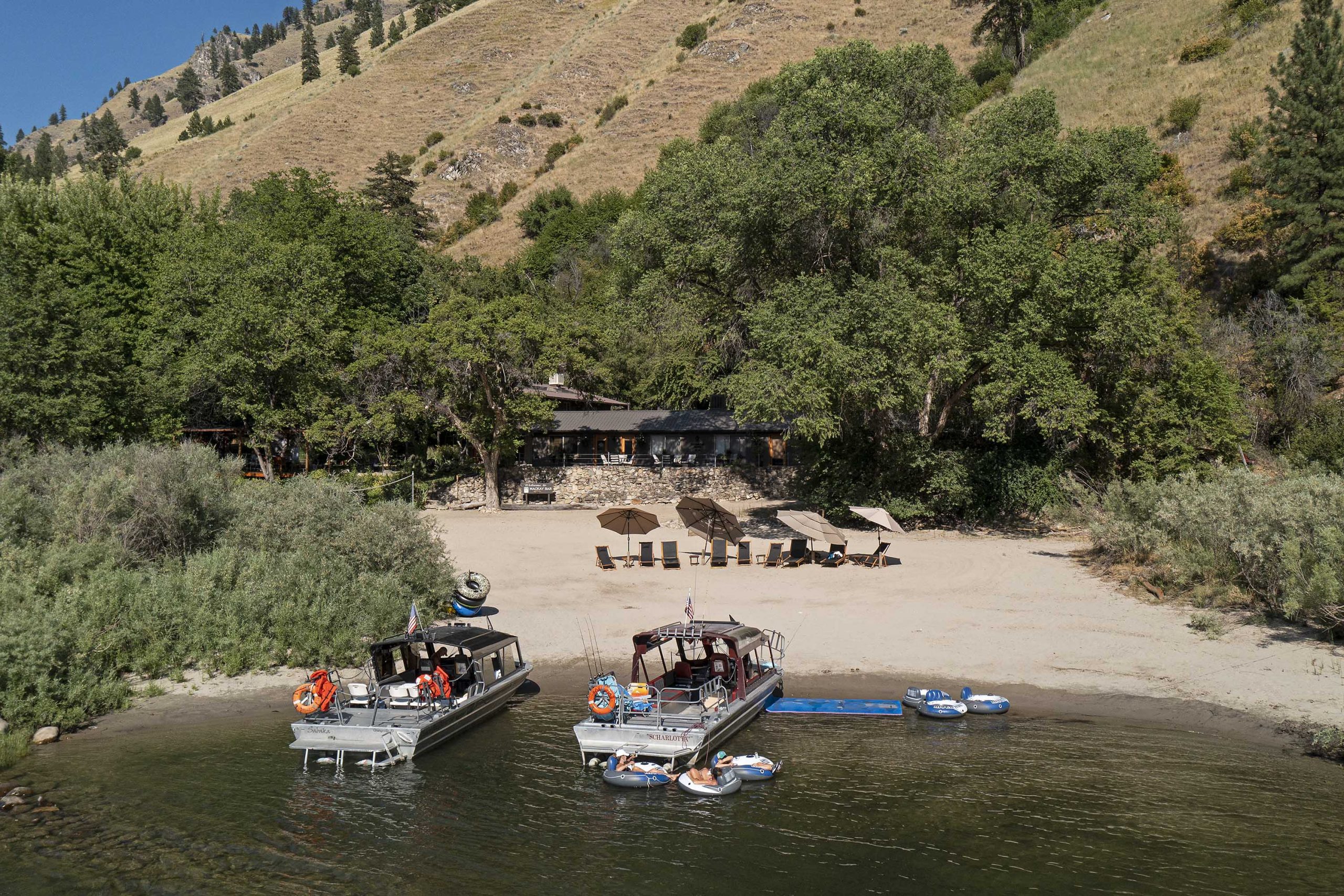 Jenkins, who, in 2021 was the national top producer for Live Water Properties and also the top individual sales agent in Wyoming, says Mackay Bar Ranch “will appeal to buyers looking for adventure in their lives.” The reaction from potential buyers to the WSJ feature supports this. Within hours of Mackay Bar appearing online, “it had generated a number of inquiries, which validates that the ranch actually represents an experiential opportunity to own more than dirt,” Jenkins says. “Mackay Bar is a way of life that only comes with being an owner of a property like this. It makes you feel alive. It will test and reward you.”

The Wall Street Journal pointed out that the nearest city to shop and dine in is Riggins, home to 230 residents and a natural hot springs. To get to Riggins, which is near the confluence of the Salmon and Little Salmon Rivers, from Mackay Bar you must travel about 26 miles by jet boat, then about 26 miles by car. (You keep your car parked at the boat ramp.) The nearest major city and international airport to Riggins is Boise, Idaho, which is a three-hour drive south.

In 2019, Discovery Channel referred to this area as one of America’s “last frontiers” and filmed a 6-episode television series, “River of No Return,” here. 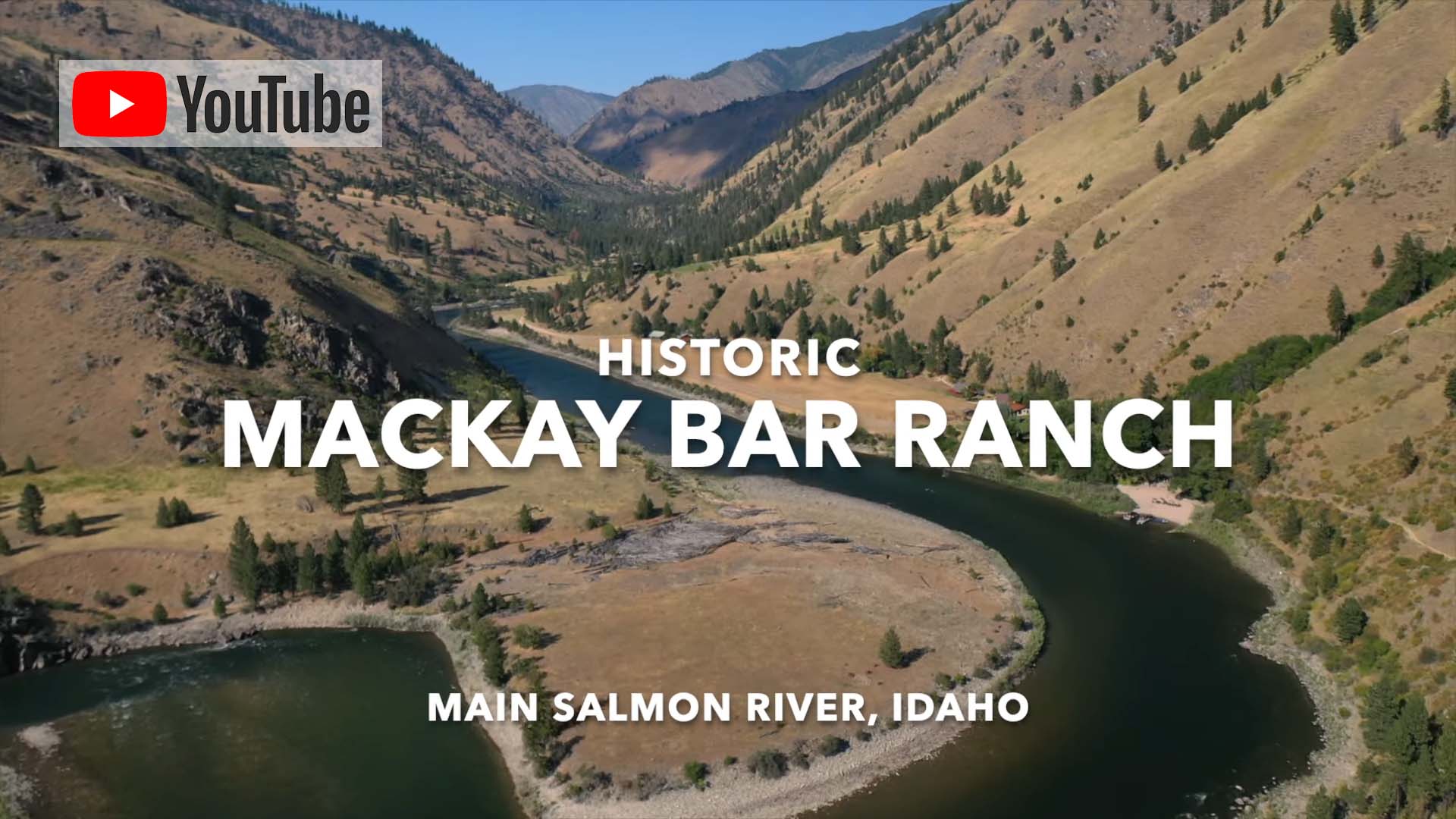 “Just getting to Mackay Bar is a welcomed adventure,” Jenkins says. Once there, “life along the river in the ‘riverhood’ makes you feel a part of something; like the old times, there is a level of co-dependence among members of the riverhood to support and help each other.” The ranch is self-sufficient though. WSJ journalist Libertina Brandt wrote, “A hydro generator provides the ranch with power and Starlink provides internet service.” The current owners, Idaho natives Joni and Buck Dewey, who live at the ranch with their 12-year-old son Dax, told the newspaper that the ranch has 24/7 power. “It makes the ranch self-sufficient and allows us to be detached from society,” said Ms. Dewey.

“Mackay Bar Ranch is life in the wild, in total comfort.”

While Mackay Bar is remote, the Wall Street Journal wrote that it is not rustic. “Buildings on the property include a main lodge, three private cabins, and a six-bedroom guesthouse.” The main lodge is 3,000-square feet and overlooks the Salmon River. Each of the three cabins has a bedroom and loft. The guesthouse has four en suite rooms on the ground floor and the two-bedroom River Suite, which is upstairs and has views of the river. All of the ranch’s buildings have been remodeled over the last seven years.

Mackay Bar also has an irrigated pasture, a horse corral and barn, a low-water jet boat port, a white sand beach, and a 2,000-foot landing strip. Other properties on the Salmon have a harbor and landing strip, but Mackay Bar’s are unique. Not all river harbors are low-water, which means that it is deep enough that jet boats can dock at Mackay Bar even when the Salmon’s water level drops, as it surely does in the late summer after the snow has melted off the surrounding 9,000 and 10,000-foot tall mountains. Mackay Bar’s landing strip is one of the best on the Salmon River because pilots can land upstream or downstream and because of its relatively low elevation (2,172 feet above sea level), which means it is snow-free later into the fall and earlier at the end of winter than most of the other airstrips on the river. While part of what makes Mackay Bar Ranch special is the adventure of getting there, there’s no other backcountry wilderness property that is as easily accessible. 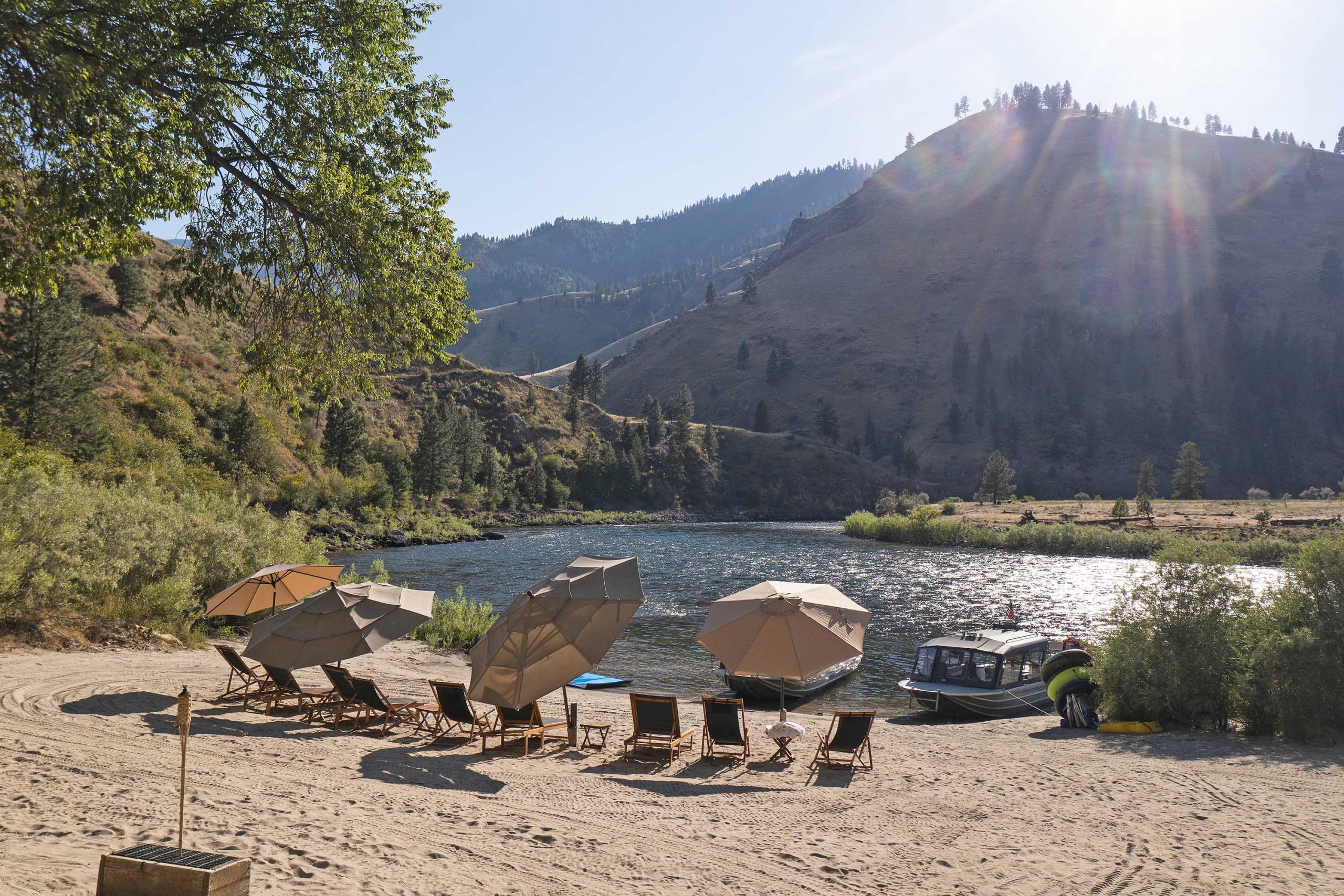 “Mackay Bar Ranch is a luxury property in an off-the-grid, remote location,” says Jenkins, who, earlier this summer had the most expensive listing in Wyoming, a 233-acre acre conservation property, Jackson Hole Ranch, under contract in nine days and closed in 33. “Mackay Bar Ranch is life in the wild, in total comfort.” 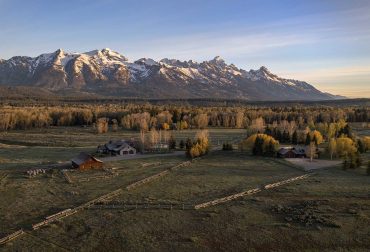