Home » Articles » Always on the Sunny Side: Sunday Night “Church” at the ‘Coach 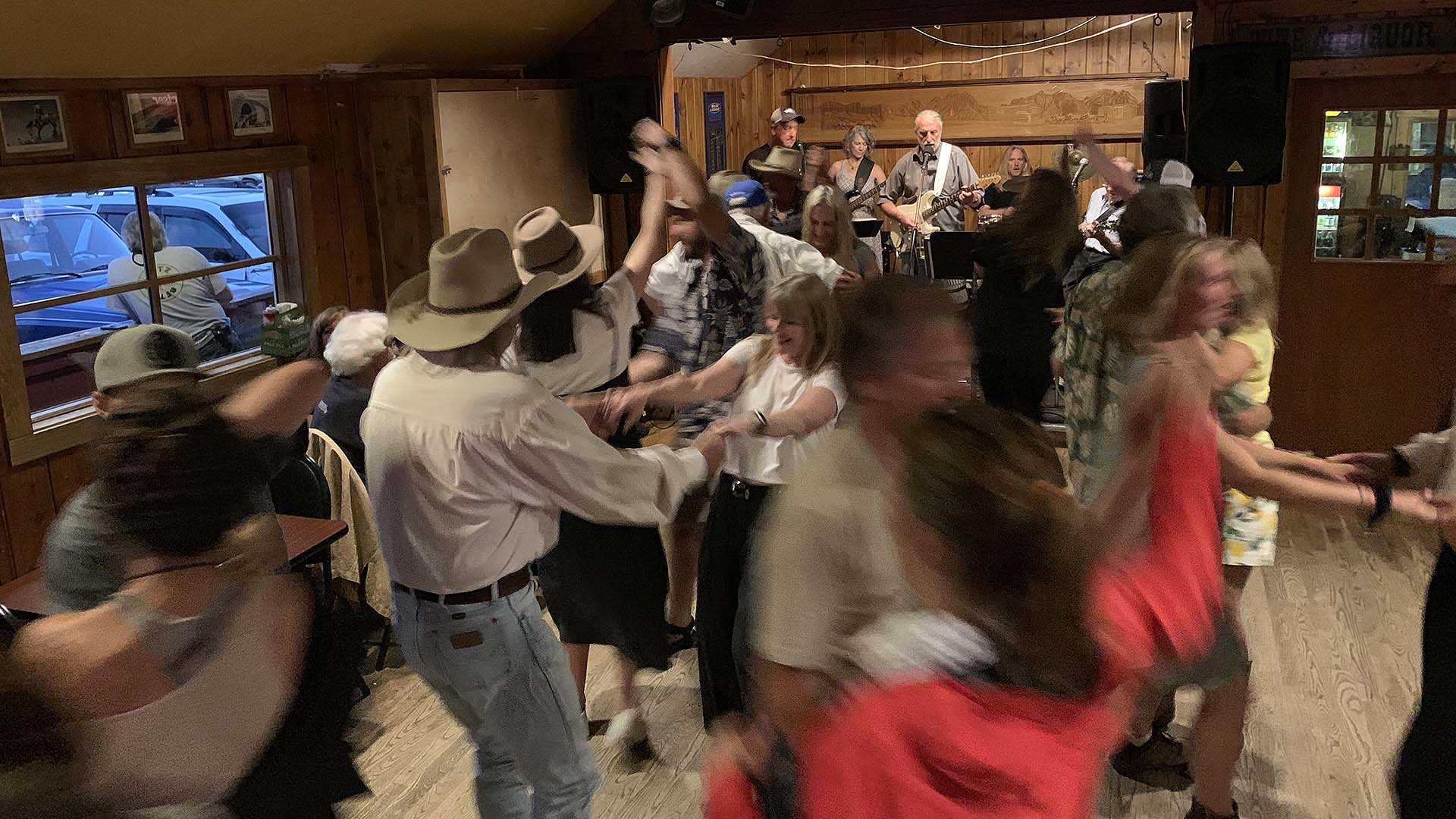 “I suppose we were trying to soothe the savage souls of the wild cowboys with music,” octogenarian banjo-player Bill Briggs shrugs as he reminisces. “It was really a rodeo cowboy bar to begin with.” Bill recalls the genesis of what’s now known as “Church” at the Stagecoach Bar at the foot of Teton Pass. This ritual of Sunday night live music and dancing, begun over fifty years ago, has endured and continues to draw a crowd that reflects the true soul of Jackson Hole.

In the sixties, prior to the inception of “Church,” the Stagecoach Bar was the scene of far more bare-knuckle brawls than dancing. Bill remembers boot and buckle boasting cowboys, still dusty from rodeo rides, who would frequently take disagreements to the parking lot outside. Inspired to bring a calming, unifying force to the community, local musician Ron Scott launched the concept of the Sunday evening acoustic sessions and invited Bill to join in on his banjo.

While the music itself was not religious in any denominational sense, Bill recalls that there’s always been something about the performance that has a spiritual and community-minded focus. “I call it religious, but it has an overtone of doing something good for the community – doing a service,” explains Bill. “From Ron’s point of view, he wanted to bring peace to the place. He didn’t like the cowboys fighting. We all hoped that music would have a positive effect on the whole community.” It was this aspiration for amity and fellowship that inspired the moniker: Church. They couldn’t have known then, but their vision would endure; fifty years later, Sunday nights at the ‘Coach are still deeply authentic, a gathering time for friends and strangers, energized by music and connection.

“It was to be fun,” Bill says with a wide smile and a sparkle in his eye. “We’re not serious, and we haven’t been since!”

Within a couple of years, and with the addition of guitar player John Sidle, the band shifted away from folk tunes and embraced a new identity as a country-style dance band. Soon, a bass player and drummer helped fill out the sound, and the community loved it. The Stagecoach on Sunday night was no longer a place for black eyes and bloody knuckles – it was the perfect spot to sip a cold drink and swing the night away. And it still is. 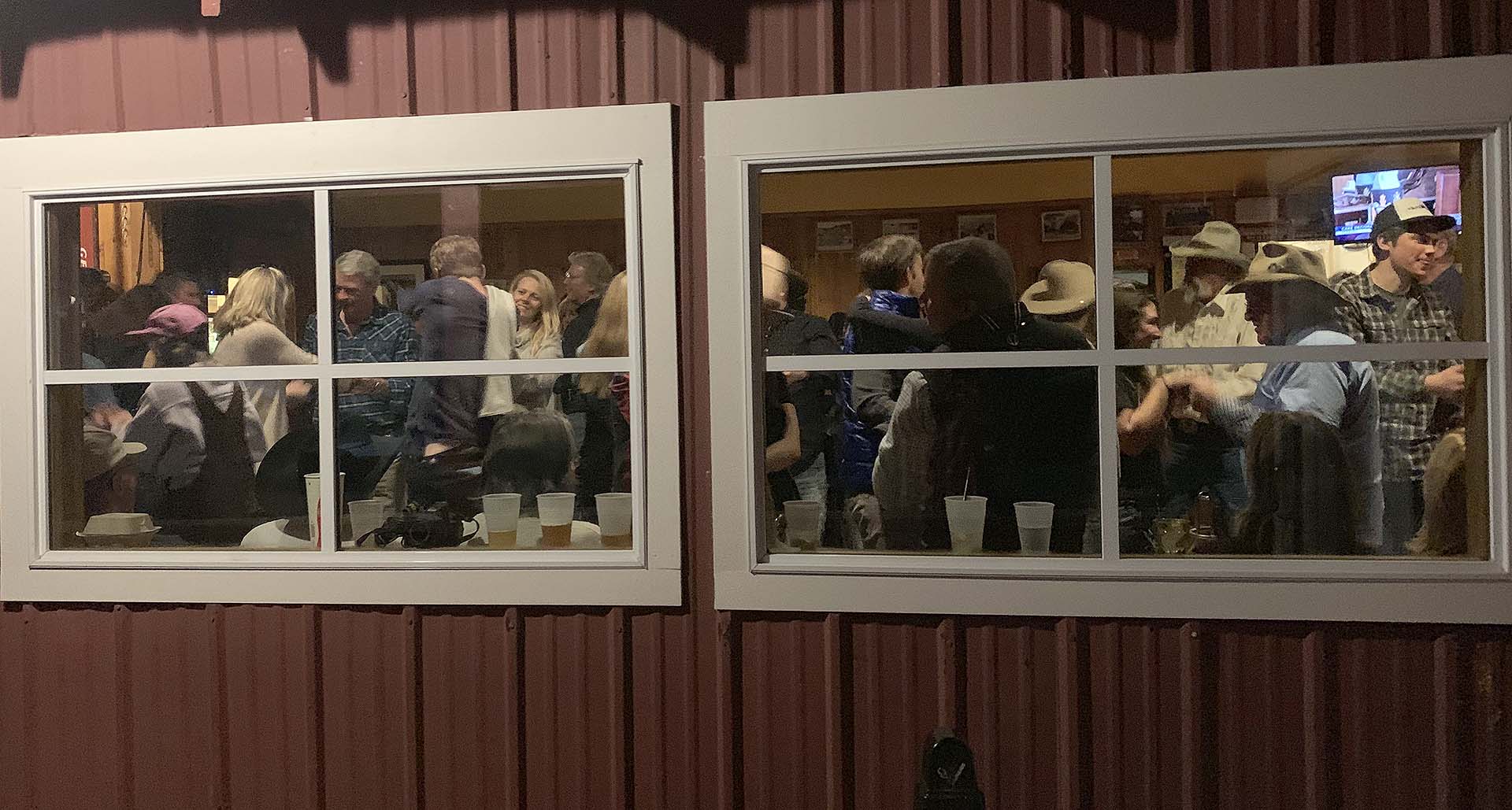 Jackson Hole has always been a colorful blend of people, and the crowd that shows up to Church is a brilliant reflection of the mix. The crowd that populates the low-slung, rust-toned bar includes ski bums, hippies, the well-heeled, and cowboys, locals and visitors alike.

“One of my favorite settings that speaks to why we love living here, it’s this shared love of place that transcends all of our differences,” says Latham Jenkins.

Bill agrees that what makes Church deeply unique and able to endure for so many decades is the community’s support and engagement. “It’s the contribution of the audience that makes this such a special event,” he observes. “I love to watch the dancers, they’re just so much fun. And I love to see families participating, with everyone enjoying the music on the dance floor and even kids out in the grassy yard. We have people from 2 years old up to at least 92, with everybody in between! That’s 90 years being covered – it’s the full range of the community.” 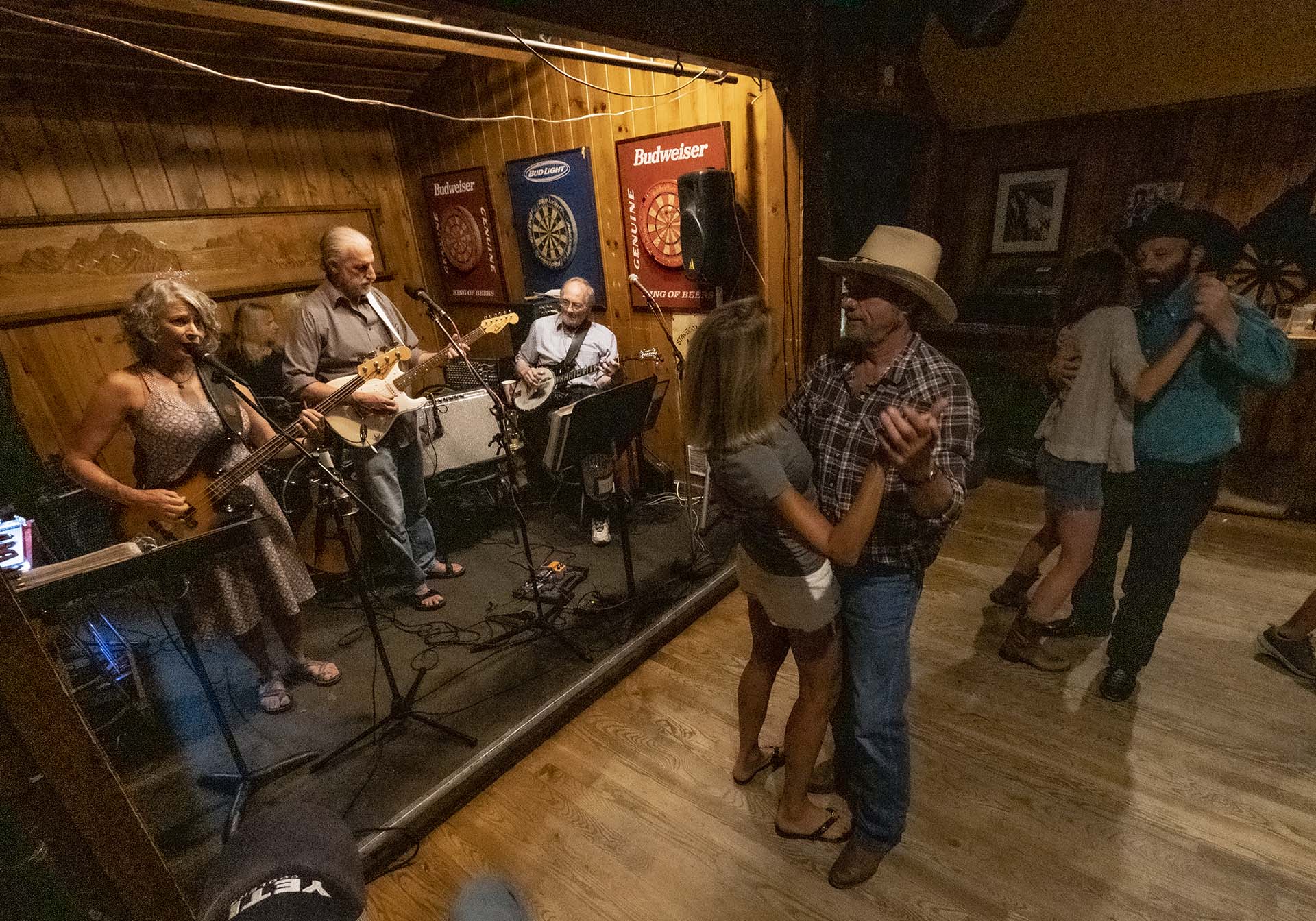 Wilson musician Phil Round has played with the band on and off for about forty years now. “I love seeing people interact in a fundamentally different way than they do in other bars around town. It’s not some shallow pick-up scene. People really come to dance and connect,” he muses. “It’s always so great when tourists come up to us and say, ‘Gosh, you guys are great! We’ve had the best experience here!’ And it’s because they’ve been a part of something really energetic and authentic in this little hole-in-the-wall bar.” For the hours the band is playing, they’re not just visitors; they’re part of the community.

“You never know what’s going to happen on any Sunday,” Bill explains. Over the years, the crowd has revealed some surprising faces, some of whom have accepted invitations to jump in with the band. Acclaimed musicians from Tim O’Brien, Tom Paxton and Chuck Pyle, to John Denver and Bob Dylan have all shared the stage at the ‘Coach. “On our 1000th Sunday, we were playing outside on a flatbed trailer,” muses Bill. “And out of the crowd walks Jerry Jeff Walker. He climbed on up, and played the whole first set with us! Jerry Jeff Walker! I don’t even know where he came from.”

Other surprises have been less… productive. Bill recalls a particular cowboy who decided to ride his horse into the bar. “He had to duck to make it through the door, which he did. I mean, I don’t know why he did this, but he did. Well, once he made it in, he was sitting upright on the horse, not looking where the horse is taking him, and smack! He hits his head on one of the beams.” Though that cowboy hit the barroom floor in the mid-1970s, his tumble still inspires a hearty chuckle from Bill today. 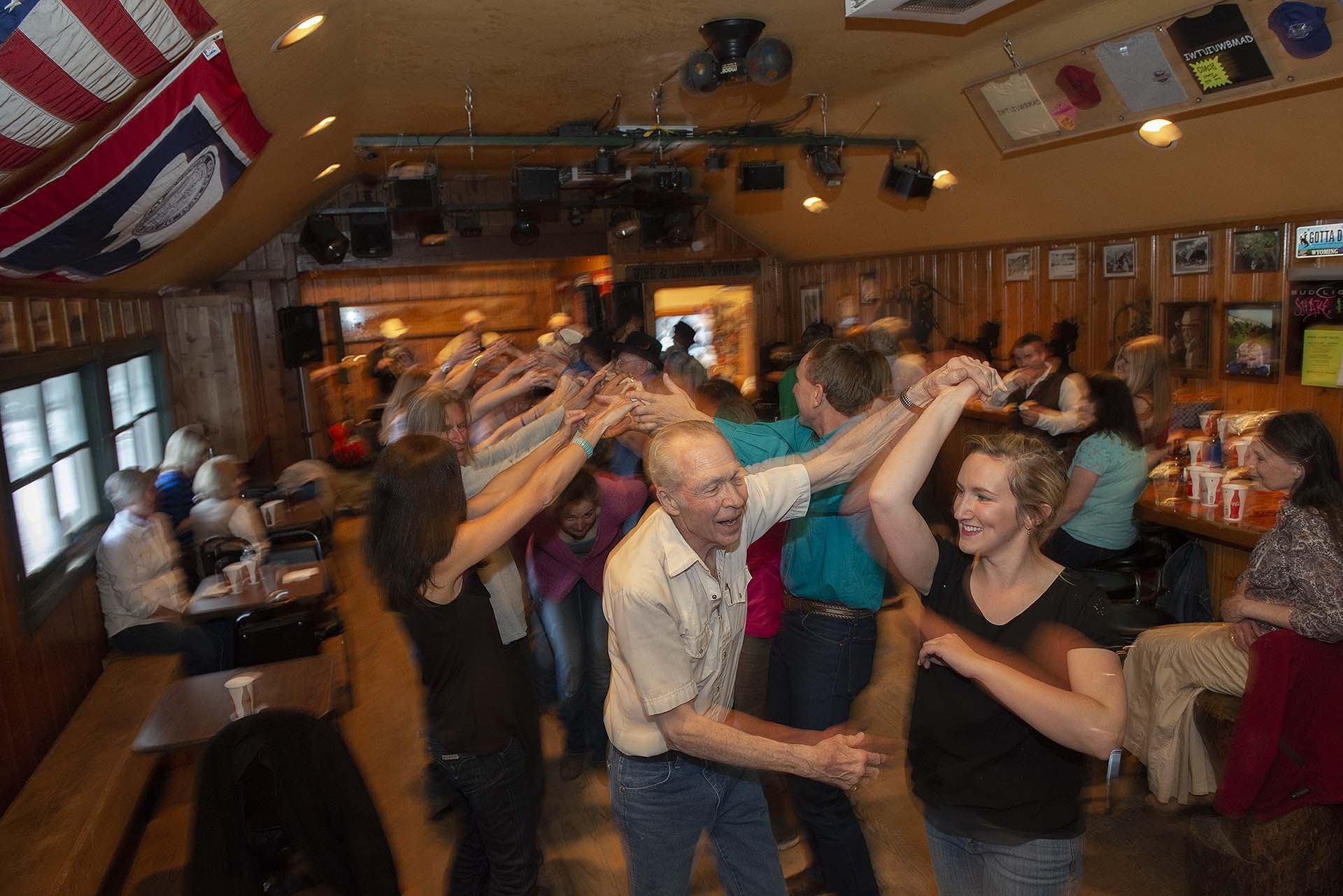 The other critical ingredient to the success of Church? The reliable, ritual nature that the evening has taken on. There’s no question if the Stagecoach Band will be on stage on any given Sunday; they will be. And though their kickoff song has changed a handful of times over the half-century they’ve been playing, the final song of the night has remained the same since the first Sunday: Keep On The Sunny Side.

“It’s what Ron started,” explains Bill. “It’s a positive and uplifting song, and that’s the message that he really wanted from the start.”

Latham agrees that there’s a real power to the song that closes out the evening. “One of the lines in the song says: ‘It will help us every day, it will brighten all the way.’ – It’s a great way to end the week and set the tone for the following.” Immersed in an unlikely mix of neighbors, lifted up by the enthusiasm of the band – Bill, Phil, and the Stagecoach Band have managed to bring Ron Scott’s vision to life, and keep it truly thriving for over fifty years. 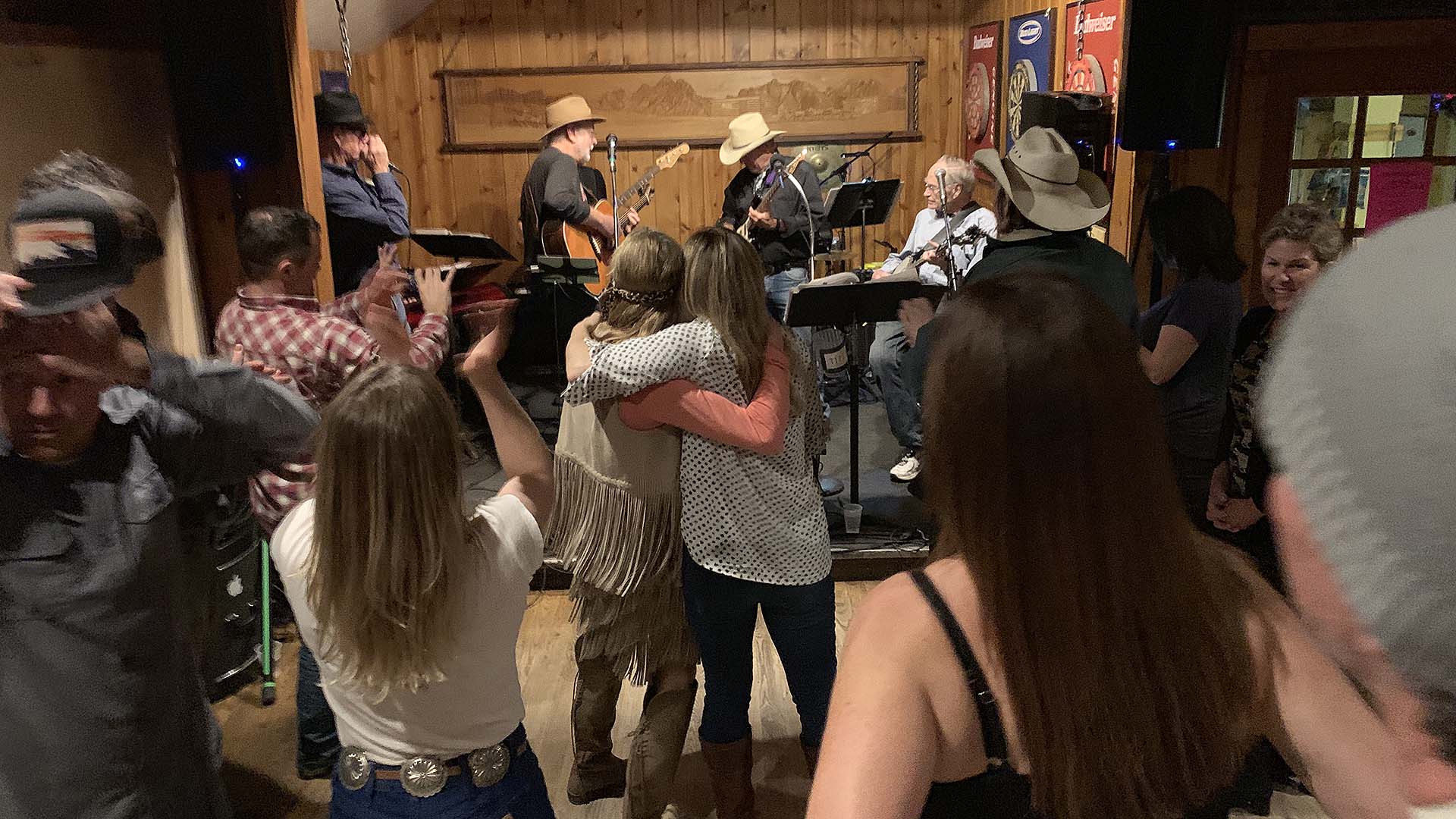 “Every single time I’ve played, I’ve looked out at all the people in the crowd,” says Bill. “When they arrive, they’re fairly straight-faced, you know? But by the end of the evening, it’s just smiles everywhere.” With a chuckle he adds: “And I don’t that’s just the booze.” Bill is hopeful that Church at the ‘Coach has a long future ahead, and the fact that so many hold the Sunday night ritual near and dear gives him confidence that it will.

“I’ll be playing Church until I’m 100,” he says, with a determined nod. “And you can bet that birthday will be quite a party!” 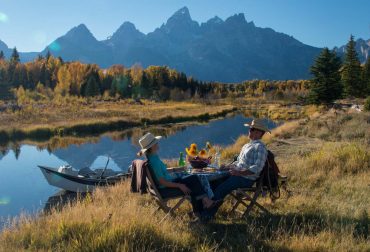 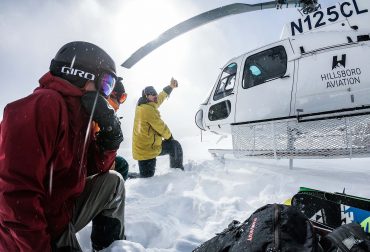