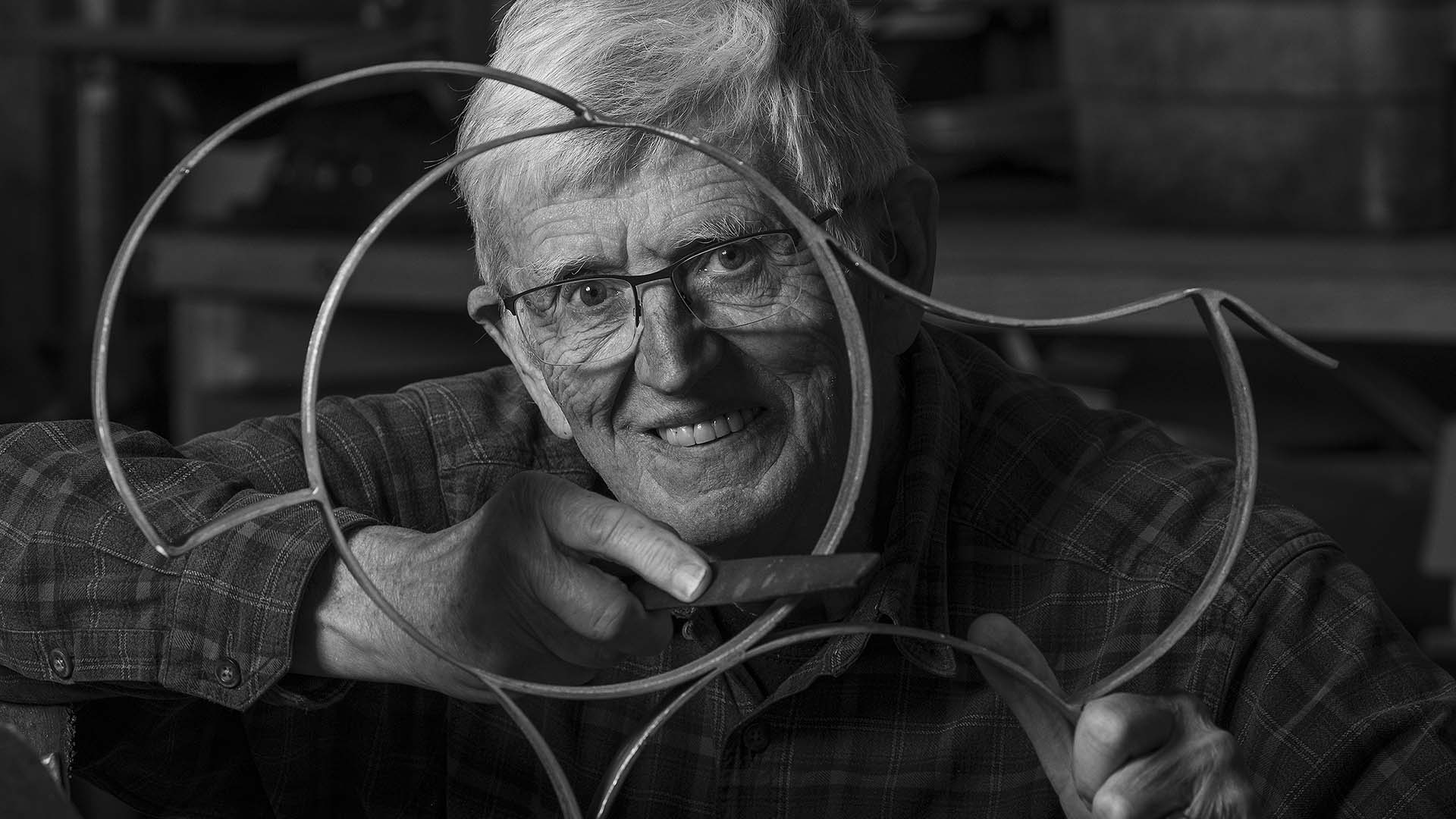 The Western frontier has long been mythologized as a land of boundless opportunity – a place of freedom, a blank canvas that invites innovation and creation. Jackson Hole has always attracted people who seek and cherish this unique wildness, who draw inspiration from the unparalleled beauty of the landscape, and also from the challenges that it can pose. When John Simms arrived in Jackson Hole fifty-five years ago, he fell in love with the place. It felt like the edge of the frontier, with adventure always beckoning just outside the door.

John has always thrived on the unique seam between unbridled wilderness and the tidy lines of geometry, mathematics and technology. Where these two seemingly unrelated worlds meet, John finds inspiration – from his groundbreaking designs for lifesaving backcountry avalanche equipment, to his top of the line fly fishing gear, to his mind-bending gigantic metal sculptures. Truly a Renaissance man of the mountains and rivers, John has lived a life beyond the boundaries, set free by a landscape and community that didn’t dare hold him back.

Like many who arrive in Jackson Hole, John tried his hand in the heavily-structured corporate world, as well as the Navy, but sought a place that afforded him more space. Not only did this beautiful and wild corner of Wyoming offer literal space, but it also had a character that encouraged creativity and taking bold, brave chances.

“When I first got here, it was the kind of place that by the first of October, the place was empty. There were all kinds of opportunities to get things started,” John reflects. And it wasn’t long before his first thrill-seeking enterprise presented itself. “One company doing scenic floats in the National Park, but no one else was using the river.”

John was particularly intrigued by a rowdy and remote section of the Snake River that flowed south out of Yellowstone and into Jackson Lake, known as the Flagg Ranch Canyon. One June – high water season – John decided that visitors to the area would enjoy the adventure of rafting the tumultuous waters. So, with the blessing of the Flagg Ranch guest complex, he set up shop and began offering trips down the river. “They all thought I was a little batty,” he chuckles as he recalls the dawn of his rafting business. “But it took off like crazy!” In his tattered Air Force surplus raft, John was making eight to ten trips each day with guests down the river and still turning people away.

He soon hired Charlie Sands – a well-recognized and legendary founding member of the Jackson Hole rafting scene – to help guide more guests on the river. The freedom to grow the enterprise and explore new segments of the river was thrilling for John, and he loved sharing the unique nature of the untamed area with visitors. People wanted to enjoy the pristine waters of Wyoming, and the momentum of the new, innovative business had little to slow it down.

In the wintertime, John and Charlie worked as Ski Patrollers at Teton Village. Unsurprisingly, their zest for adventure and thirst to break boundaries drove their skiing exploits as well. One particular exploit earned the two a namesake feature on the mountain itself. On their usual patrol route on the mountain, they routinely passed a small couloir near the legendary and more skiable Corbet’s Couloir that had never been skied. It was tight and steep: not exactly a walk in the park when it came to ski runs. But after noticing it day after day, John finally felt compelled to give it a go.

“I remember getting up to the edge and looking down,” he reminisces. With a smile he recounts his verdict: “I thought to myself – that’s survivable.” And down he and Charlie jumped. The pair swore they’d never divulge who went first, and who followed behind. Keeping that detail secret added a flair of mystery to the legend, and kept the credit equally distributed.

Upon their return to the Ski Patrol headquarters, their coworkers listened in disbelief. When they looked up the mountain and saw two sets of ski tracks in the couloir, they realized John and Charlie had done exactly what they claimed. Immediately, the run was dubbed “S&S Couloir” – for Simms and Sands and their gutsy trailblazing jump.

Driven by a clear passion for mountain snow, John quickly became an expert on avalanches and snow science. He was disheartened every time he heard of a skier dying under tons of avalanched snow, despite their comrades’ efforts to unbury them in time. Too often, skiers lost the race against the clock, and perished in slides. “People were getting caught in avalanches, and folks were trying to dig them out with a ski tip – that’s futile,” John explains. “I wondered to myself, ‘Why doesn’t someone make a shovel?’” 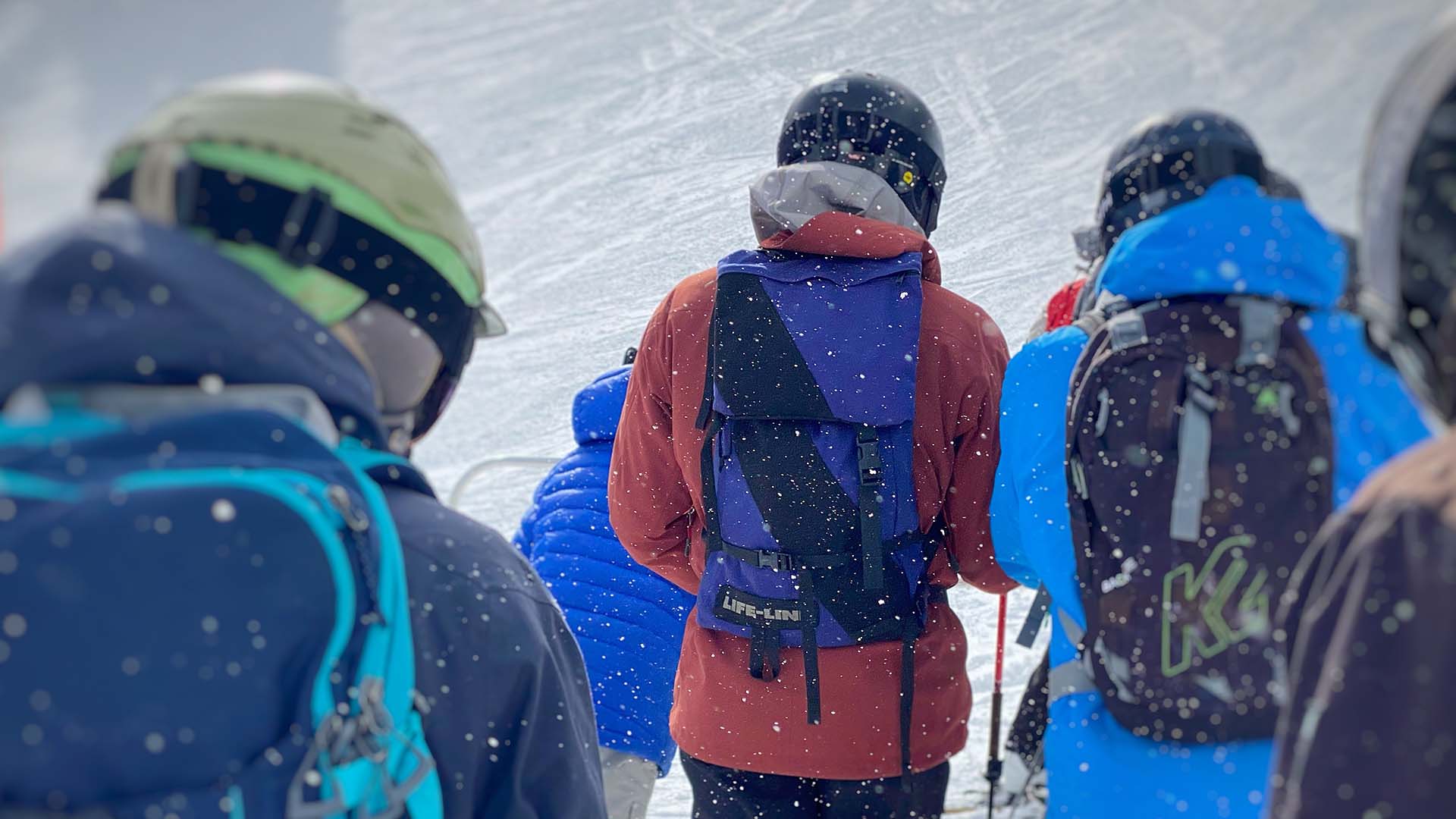 Fully immersed in the Jackson Hole community, surrounded by friends who also relished the unfettered freedom to build and create, John decided to make one himself. In so many other places, John’s innovations would have met resistance, roadblocks and criticisms. But in the Tetons, unperturbed by the risk of such judgment, he designed a tool that revolutionized backcountry safety. With one visionary shovel, LifeLink was born.

Further inspired by his passion for skiing, and his deep knowledge of snow science and avalanche behavior, John developed a full line of ski gear that became known worldwide as the gold standard for backcountry safety equipment. In addition to the lightweight rescue shovel, he designed ski poles that connected to swiftly form an avalanche probe and more. Over the years, his inventions have saved countless lives.

“One fellow came into my office, and he had tears in his eyes. He’d just come back from Everest, and they’d had an avalanche. They were able to rescue two people with my shovel. He told me, ‘I’ll never ski without your shovel in my pack.’” John remembers these stories as if they were yesterday; his innovation, determination and design prowess can literally be measured in human lives. It’s a badge of honor that he treasures, and carries with humility and grace.

His success in creating forward-thinking ski equipment made him consider how he might also use his design skills to solve the challenges that he faced during his summer work: fly fishing on the Snake River. (He’d since handed over the reins of the whitewater rafting to Charlie Sands, and was guiding high-profile guests on fishing trips instead.) Tired of rocks sneaking into his wading boots, John designed a neoprene cuff as a gravel guard – an item inspired by gaiters that he’d developed to keep snow out of ski boots.

Previous experience with LifeLink was encouraging to John; he was in a place that was full of people as passionate as he was about adventuring outdoors, and were supportive of his creativity and boundary-pushing innovations. Once the ball began to roll on his vision for top of the line fly fishing gear, there was nothing in the way; he boldly pressed ahead. 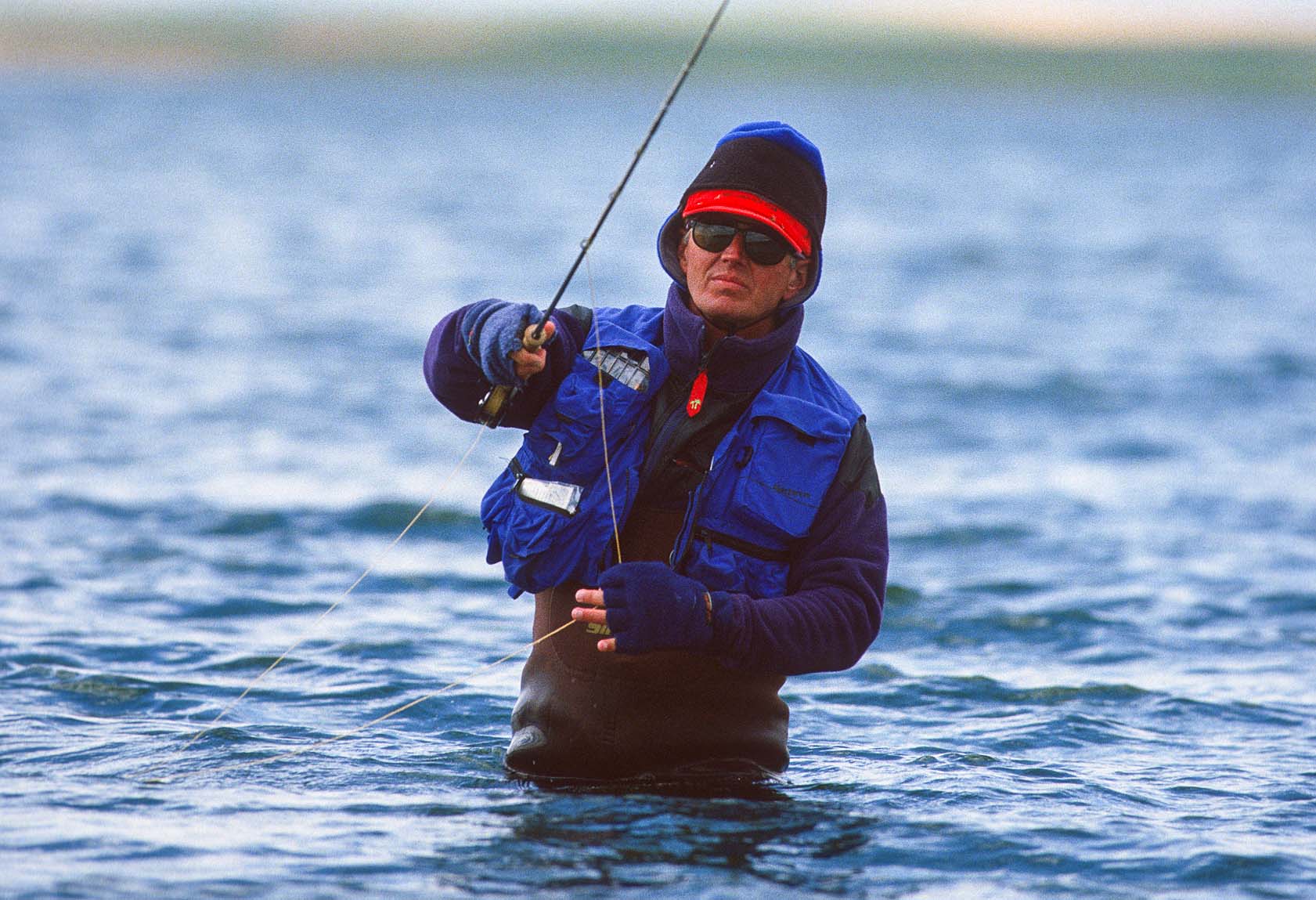 Soon, the work with neoprene practically invited itself to become full-on waders. The material was warm, pliable and easy to wear all day on the river. It made longer fishing trips in cold water not only possible, but comfortable. “There were no other breathable waders on the market,” John explains. The careful combination of neoprene and GoreTex kept the waders light, comfortable and durable. Anglers loved them, and soon Simms fishing products were expanding. They’re still some of the most loved and respected tools of the fishing trade; guides across the world reach for Simms gear for its unmatched quality and durability. To this day, they’re the only waders on the market made with American GoreTex – a testament to the vision and unsurpassed excellence of John’s invention prowess.

Again, John’s passion for the outdoors revealed a need – a problem to be solved – and his geometrically-educated mind quickly found an elegant solution. “I’ve always liked the idea of fixing things,” he says. He’s also swift to credit his education in non-Euclidian geometry. “As I was learning it, I remember thinking – that’s kind of like me! Thinking differently is absolutely a viable way to live. It’s okay. A lot of people are afraid to think outside of the box.” And Jackson Hole is a community that has always held space for free thinkers to flourish, and encourages people like John to continue following passions and fresh ideas.

While John’s adrenaline-fueled adventures are fewer now, he’s still deep in his world of nature and mathematically-informed interpretation of the landscape around him. As an artist, he’s come to love designing and building gigantic metal sculptures – one of the most easily recognizable around Jackson Hole is his iconic bison. Why a bison? “I’ve always really admired the bison and their boldness,” he observes. “I think they have a great attitude. It kind of went along with my approach toward life – being free and unencumbered.” And Jackson Hole continues to offer John a unique space to exist in total freedom to explore, express himself and create.

With the help of a computer program that was originally intended to design yachts, he creates graceful and complex designs that he then constructs in large scale. Many of them are wind-driven; their careful lines and negative spaces invite the influence of the natural world to reveal art that appears to dance on its own.

“They’re part of my personality and creative energy,” John explains. And John loves the fact that the community still holds space for such creativity and art. In purest essence, John believes that Jackson Hole is freedom: liberty to create, explore and innovate free from burdensome social constraints. “It’s the freedom to really do what you want. I’ve never felt held back in any way,” he reflects.

“I’ve done a lot of wild things, but I’ve never been in trouble!” John chuckles as he looks back over the years he’s spent in Jackson. “People always ask, ‘What are you going to do next?’” John doesn’t have a quick answer, other than a playful shrug and a smile that still has plenty of mischief in it. There’s no doubt that he’ll keep creating, and thriving in the freedom of the West. Freedom to plunge into a surging river, freedom to take a leap of faith on skis, and freedom to create things that the world seems to be missing. 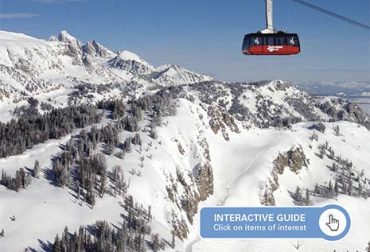 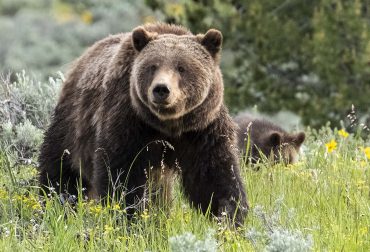