Ellen Gallant is a cardiologist who dreamed of climbing Mt. Everest. After years of training and preparation she arrived at basecamp on April 18, 2014, the day 16 climbers died in an avalanche. She returned in 2015 and was at basecamp in April when a massive earthquake caused another avalanche, killing 22 climbers.

Damien Mander was a sniper in the Australian Special Forces who fought in Iraq and Afghanistan and trained military cadets. When he became frustrated at the inability of law enforcement and national governments to curb rhino poaching, he founded the International Anti-Poaching Foundation, applying military training techniques to wildlife units to protect endangered species.

These are stories of resilience shared at this year’s TEDx Jackson Hole. The October event sold out, said Lisa Samford, executive director of the Jackson Hole Wildlife Film Festival, which puts on the TEDx talks.

The event is a localized version of a TED talk and is meant to inspire conversation and action. It started in Jackson in 2011.

Each year a panel chooses stories that fit a theme, like extreme, or disrupt, or this year’s resilience.

The speakers come from around the globe, but this year many were locals, like Hultman and Gallant, Samford said.

“These are the kind of people that come from Jackson Hole,” she said.

“They blew the roof off,” Samford said.

They shared the stage that night with Josh Bogle, who caught a rare staph infection from a fishhook to the foot. It forced him to amputate both legs, his right hand and the fingers of his left hand. Instead of falling into despair, he plans to break into movies and started a nonprofit to help people with prosthetics.

Megan Parker talked about her efforts in training dogs for conservation efforts and endangered species preservation.

Tracy Ross is the author of the “The Source of All Things,” a memoir that grew out of an essay about the sexual abuse she suffered. And Louie Schwartzberg spoke about the resiliency of nature and how mushrooms could save the planet.

The lineup is meant to be diverse, Samford said. It’s also meant to change the way people look at the world, their neighbors and themselves. 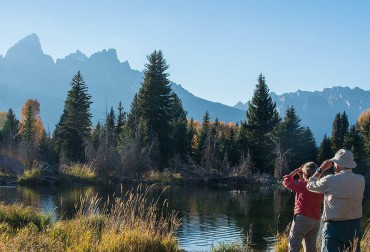 Next PostKiplinger: 10 Best States for Taxes on Retirees